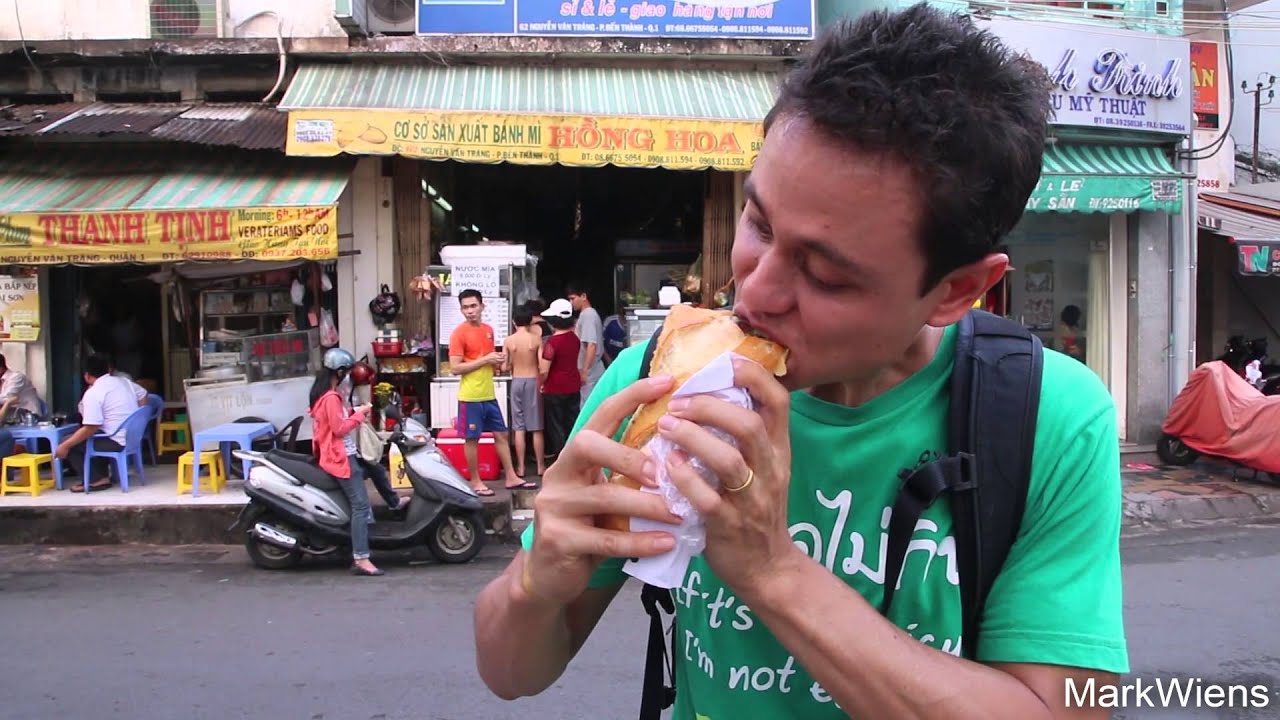 Bánh Mì is one of the most well known and beloved of all Vietnamese street foods. In this video, I ate at Bánh Mì Hồng Hoa, and I thoroughly enjoyed it. Get all the details here:

You may have already seen a short clip of this video in the full food vlog of the day: (you can watch this if you haven’t seen it).

Bánh Mì (also spelled banh mi), actually just means bread in Vietnamese. However, outside of Vietnam, the term often refers to the Vietnamese sandwich, wrapped into a crusty baguette. In Saigon (Ho Chi Minh City), you seriously can’t go more than a few meters without seeing the next banh mi vendor or stall. It’s one of the most popular Vietnamese street foods, and it is great for both takeaway and sitting down for a nice bite.

Banh mi sandwiches are often eaten for snacks, or for light meals. The personal sized baguettes, which have influence from the French, are very light and airy, and they are not overly filling. The outside of the bread is incredibly crusty and crunchy, and the inside is very soft and airy. Together, the contrast of textures, makes it perfect for a sandwich. Like I said before, there’s a near infinite amount of places to get banh mi in Saigon, but on this day I went to a place not too far from where I was staying called Bánh Mì Hồng Hoa. While some of the other famous banh mi restaurants in the area are only open in the afternoon and evening, this restaurant is mostly open in the morning, and served a crowd of people for takeaway every morning.

I ordered their most basic normal banh mi, a sandwich that began with a nice freshly baked baguette (and by the way, they were also selling freshly baked baguettes, which were hot and fresh), that was cut in half, then filled with a mixture of pate, mayonnaise, a few different slices of Vietnamese cured meat, meatloaf, and some grilled pieces of pork. On top of that, she also loaded in a nice amount thinly sliced crisp veggies like cucumber, green onions, and cilantro, and then some Vietnamese pickled, including daikon radish and carrots. Finally, she added a little more seasoning, and finally added some fresh red crushed chili to give it some heat.

I have to be honest and say that this was one of my first banh mi sandwiches I had when I arrived in Saigon, and it turned out to be one of my favorites of my entire trip. It wasn’t the most impressive one, but I thought it was the freshest and the most well balanced of all of them. It had just the right ratio of meat to sauces, and it had a nice touch of all the fresh vegetables. The ratio and mixture was perfect for me, and their bread was also fresh and crusty. On top of having a wonderful banh mi, the staff, and all the owners of Bánh Mì Hồng Hoa were all extremely friendly and were happy that we were there enjoying their sandwiches.

I ate the banh mi and filmed this food video at Bánh Mì Hồng Hoa:
Open hours: I think open mostly during the morning
Price: This beauty of a sandwich cost just 17,000 Vietnamese Dong – money well spent and fully enjoyed.

The music in this video is from audionetwork.com
This video was made by Mark Wiens and Ying Wiens at: &
Grab a copy of our Eating Thai Food Guide:
Don’t forget to subscribe for more delicious food and travel videos: